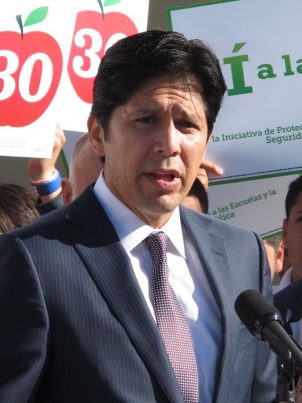 California wants to be the first state in the union to be known as a sanctuary state. The term “sanctuary” is best explained through the lens of recent history concerning sanctuary cities as explained by Apsanlaw.com. Simply defined, a sanctuary city engages in a series of “procedures that shelter immigrants.” These include withholding funds to assist implementation of federal immigration law, and/or not allowing local law enforcement or employers to ascertain a person’s immigration status. These cities may or may not have a formal written policy, says Steve Salvi, who, since 2007 has maintained the complete list of all U.S. sanctuary cities at Ojjpac.org.

Sanctuary cities were a response to a Congressional bill passed in 1996, “known as the Illegal Immigration Reform and Immigrant Responsibility Act (IIRIRA). This federal bill “requires local governments to cooperate with Department of Homeland Security’s Immigration and Customs Enforcement (ICE) Agency. In the two decades that have passed since the IIRIRA was put into effect, the disconnect and the tension continue between federal immigration laws and how that plays out in municipalities. For one stark example, listen to recent testimony from California State Senator Kevin De Leon (D-Los Angeles) whose current position is the California Senate President Pro Tem.

As reported by Zerohedge.com, De Leon was speaking in front of the California Senate Public Safety Committee on behalf of SB 54, a senate bill he had introduced as the legal means for the entire state of California to be considered a sanctuary. Around 1:27:30 in this video, you’ll hear the Senator say that half his family would be deported, cause they’ve got fake social security cards, false identification, or fake driver’s licenses.

This confession was also included in Senator De Leon’s remarks:
. . .”anyone who has family members, you know, who are undocumented knows that almost entirely everybody has secured some sort of false identification. That’s what you need to survive, to work. They are eligible for massive deportation.”

Senator De Leon knows the law, and it appears that his family who have false identification also know the law, but they choose to break the law in order to appear as though they are following the law. This is a State Senator’s family, so imagine how many other families are doing exactly the same thing.

Stealing someone’s SSI card is easy, because if you happen to be the victim of employment-related identity theft, the Internal Revenue Service (IRS) doesn’t inform you, reports The Washington Times. It’s estimated that about one million  taxpayer’s SSI numbers have been stolen. But that may be a conservative figure.

In an article from 2006, the New York Times stated that the Social Security Administration “receives eight to nine million earnings reports from the IRS that do not match their Social Security numbers.” When this article was written eleven years ago, these big government mismatches were “concentrated on industries that hire a lot of illegal immigrants.”

It’s not just the IRS that doesn’t notify employment related identity theft, the Social Security Administration is “legally barred from sharing information with immigration or law enforcement agencies, or from telling the rightful owner of a Social Security number that someone else is working under their number.”

It appears that the swamp President Trump wants to drain is getting deeper. (RELATED: Keep up with the latest news on Donald Trump at Trump.news.)