NYT commits TREASON in fake news attempt to overthrow the United States Government… is it time to start arresting traitors who pretend to be journalists? 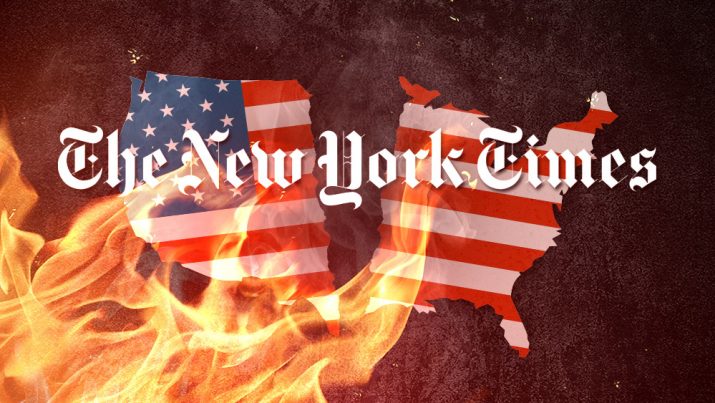 The New York Times is now actively engaged in deliberate acts of treason against the United States government. Following in the “journo-terrorism” practices of the Washington Post, the NYT has just published a wildly irresponsible innuendo piece that, predictably, cites anonymous intelligence officials in an attempt to discredit the Trump administration and enrage opponents.

As the Daily Caller points out, the hysterical NYT article is nothing more than a “rehashed” collection of innuendo and paranoia that lacks any real journalistic substance. “While the story states that the Federal Bureau of Investigation has found no evidence of collusion between Russia and the Trump campaign and essentially is a rehash of a previous story, journalists have gone bonkers over it,” reports the Caller.

The entire story is bogus, right from the false insinuation of the headline itself, which even the story refutes. As explained by The News Commenter:

The New York Times bombshell headline reads “Trump Campaign Aides Had Repeated Contacts With Russian Intelligence”. But note the third paragraph in, it reads “The officials interviewed in recent weeks said that, so far, they had seen no evidence of such cooperation.”.

Shouldn’t the headline read “No Evidence Trump Campaign Had Contacts With Russian Officials”? What a joke. New York Times is #FakeNews.

This new habit of the anti-Trump “fake news” media of citing “unnamed” intelligence officials to roll out wild, unsubstantiated accusations is the new modus operandi of the treasonous, anti-American media. The NYT, Washington Post, CNN, the Atlantic and other Trump-hating media outlets are now focused almost entirely on waging a “soft coup” overthrow attempt against President Trump, and they’re all willing to blatantly lie or fabricate “facts” in order to pull it off.

“The fake news media is going crazy with their conspiracy theories and blind hatred,” Trump tweeted last night. “MSNBC and CNN are unwatchable. Fox and Friends is great!”

The fake news media is going crazy with their conspiracy theories and blind hatred. @MSNBC & @CNN are unwatchable. @foxandfriends is great!

He’s right: The left-wing media has devolved into a conspiracy cabal fueled by blind hatred… hatred for Trump, hatred for America and hatred toward the truth about anything. So they invoke “fake facts” and cite unnamed sources — most of which are no doubt imaginary — to wage a media disinformation campaign with the sole purpose of removing Trump from office.

Even the very basis of the NYT story turns out to be complete fiction. The Russians have officially denied the basis of the story. “Overnight, as the three liberal-leaning US newspaper launched another attack on Trump, alleging that officials linked to the president, most notably Tim Manafort, engaged Russian intel officials in the not too distant past, the Russian government dismissed allegations that the country’s intelligence officials were in repeated contact with Donald Trump’s team ahead of the US election,” writes Zero Hedge:

“Let’s not believe anonymous information,” Vladimir Putin’s spokesman Dmitry Peskov told reporters. “It’s a newspaper report which is not based on any facts.”

A Russian senator, Vladimir Jabbarov, cited by the Independent went so far as to tell state media the latest claims “were part of an intelligence community conspiracy to have the President impeached.”

“This is a common tactic to try to discredit a particular person,” he added.

As I’ve explained in my podcast below, there is also a “civil war” raging inside the bureaucracy, and some elements — Obama “sleeper cell” saboteurs — are trying to set off land mines to destroy Trump from within.

Click here for my podcast at the Health Ranger Report, or listen below (story continues below the podcasts)…

Even if such contact with the Russians had occurred, what’s the big deal? “[R]epresentatives for Barack Obama’s 2008 presidential campaign were accused of meeting with Hamas and Iran,” writes Breitbart.com:

Depending on what took place, the alleged contacts with Iran may have violated the Logan Act, which bars citizens from negotiating with foreign governments in dispute with the United States…

In 2008, Robert Malley stepped down as an informal foreign policy adviser to Obama’s campaign when it was revealed that he met with Hamas members.

Malley admitted to the meetings, but he claimed he met with the terrorists as part of his private job.

Note carefully that President Obama flew a cargo plane load of illegally laundered cash into Iran during the last few months of his presidency, literally “paying off” the No. 1 state sponsor of terror. Yet the New York Times didn’t blink. Apparently, when Trump team members talk to Russia, it’s a national emergency, but when Obama hands over hundreds of billions of dollars in cash to a nation that promises to build nuclear weapons to nuke Israel, that’s perfectly fine.

As usual, every insane, anti-American act that Obama pulled off was accepted and even glorified by the media, while every act that Trump pursues to save America is venomously demonized. The real position of the left-wing media is: “Obama could do not wrong, and Trump can do no right.”

NYT is now a domestic enemy of the United States government

With this latest assault on the Trump presidency, we really have reached the point where the NYT, Washington Post and CNN are all active enemies of America, working to deliberately overthrow the legitimate United States government.

At the same time, they are also poisoning the minds of the people with disinformation and hatred in order to gin up violent riots and foment social unrest. In effect, the left-wing media is actively trying to cause a violent uprising while pushing fake news to discredit the President. Just today, an anti-Trump protest group knocked a 71-year-old congressional staffer unconscious.

Rohrabacher denounced the left-wing violence, saying: “I am outraged beyond words that protesters who mobbed my Huntington Beach office violently knocked down my faithful district director, Kathleen Staunton, causing her to be hospitalized… And, yes, deliberate or not, the incident came as part of a mob action that not only intimidates but coerces. Though the protesters think of themselves as idealists, they engaged in political thuggery, pure and simple.”

Where does all that hatred and violence come from? The NYT, of course. The entire left-wing media is now focused on fomenting hatred, intolerance and violence in the streets while assaulting Donald Trump with fake news reports that they hope will build toward demands for his impeachment.

This is the same America-hating media that excused every violation of law and ethics committed by the Obama administration and Hillary Clinton’s State Department, which sold off uranium mining rights to Russian companies, draining a vital military resource from the United States.

The degree of active subversion, collusion and treason now being committed by NYT and Washington Post “journalists” has reached the level of active “information warfare” against America… and it calls for a law-and-order response from the Trump administration which will sooner or later be forced to make arrests of the treasonous subversives who have infiltrated the left-wing media.

The justification for making such arrests is already here: Those traitors have knowingly and deliberately fabricated false reports, false accusations and false charges against the legitimate President of the United States government. They are deliberately working in collusion to cause social chaos, hatred and derision across the population. Their goal is the overthrow of the U.S. government and the installing of Hillary Clinton as their “replacement” President, whom they will shower with mindless worship while covering up her long trail of corruption and crimes.

The left-wing media has truly become the single greatest threat to the future of America. Long gone is any pretense of engaging in legitimate journalism or factual reporting. Now, the media has become the propaganda wing of left-wing radical organizers like international terrorism financier George Soros and former U.S. President Barack Obama, who’s actually running much of this behind the scenes from his “shadow White House” from where he commands 30,000 activist “troops” who are conspiring to overthrow President Trump. With Obama now controlling “sleeper cell” traitors inside the bureaucracy, and the media committing treason on a daily basis by either fabricating anti-American news or publishing genuine intelligence secrets, the subversive Left is going all-in to try to foment a literal communist takeover of the country.

Removing Trump from office is their highest priority, followed by installing so much hatred in the minds of obedient left-wing sheeple that they rise up and start executing their political enemies. The goal, of course, is to cause so much chaos and mayhem that the nation becomes “ungovernable” and is therefore relatively easy to overthrow.

The plan is already crystal clear in the mind of left-wing agitator Michael Moore, who has now called for Hillary Clinton to be “installed as president” while Trump is arrested.

That’s been the plan from the very start, of course: LIE about the President, gin up hatred across the population, fabricate fake news “facts” from the news cartels, and make sure they are sufficiently repeated across a sufficient number of complicit websites (HuffPost, Politico, Salon, etc.) to magically transform “lies” into “FACTS!”

Click here for my Health Ranger Report podcast that explains why civil war is “inevitable” if this escalation continues.

What’s clear at this point is that America is already in a civil war. The first phase of every war is “information warfare,” where opposing sides attempt to establish a justification narrative for the violence they plan to pursue in phase two.

Understand that right now, the NYT, Washington Post and CNN are deliberately engaged in establishing the justification narrative for the violent uprising they plan to announce and support. They are laying the groundwork, in other words, for a violent coup attempt against the United States government.

The next phase, by the way, is for them to stage a false flag attack on liberals that can be blamed on Trump supporters, so watch for CNN to stage a mass shooting any day now, complete with “crisis actors” who can cry for the cameras and relentlessly sob while explaining that pro-NRA, pro-Trump gun supporters massacred their innocent children (or some such thing). Once that false flag is accomplished, the media hammers it home in the minds of the obedient left-wing sheeple until anger boils over and every major U.S. city revolts with mass chaos, riots and violence… all of which the media will characterize as “peaceful protests” or “justified resistance” against the “murderous Trump regime.”

This is how they plan to overthrow America, and they are frighteningly close to achieving it.

This is why I predict we are all going to “beg for Martial Law” in the very near future as the radical Left goes full-on bat-s##t crazy with violence and mayhem, all egged on by a complicit media that is deliberately and actively working to overthrow the U.S. government. That’s why I say it’s time for Trump to start making arrests of the anti-American subversives who pretend to be journalists at the NYT, Washington Post, CNN, etc.

It has all come down to this: You either protect America by defeating her enemies, or you lose the country to left-wing radicals. If you lose the country, America becomes a killing fields scenario, with uncontrolled civil war raging in the streets and towns while communist terrorists run by Obama and Soros stage a coup in Washington D.C. This scenario is no longer fiction. It is, in fact, the undisclosed goal of the New York Times.