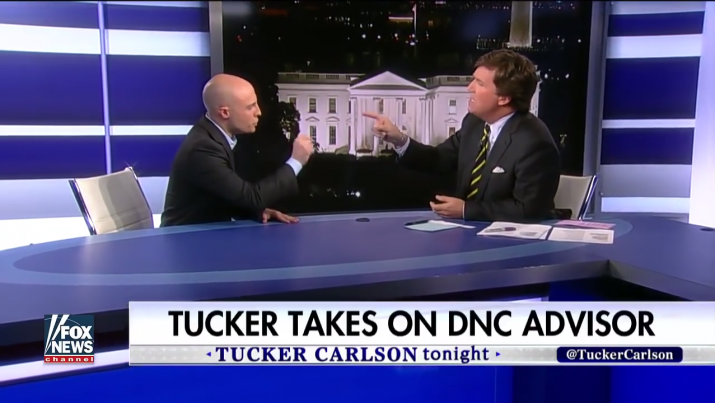 Tucker Carlson continues to keep liberals on their toes. This week he invited Democratic National Committee senior adviser Zac Petkanas on to discuss the science of gender and gender identity after Petkanas called the Trump administration “monsters” in light of the decision to allow states to decide on transgender bathroom laws for schools individually.

What was meant to be intellectual banter turned into Zac stammering over simple questions and Tucker completely eviscerating him live on air.

The interview begins with Tucker reading Petkanas’ tweet which stated, “I woke up feeling so sick to my stomach about the trump white houses attacks on vulnerable LGBT kids. These people are monsters.” Tucker brings up the point that the Obama administration waited seven years to develop the policy in the first place, so that should imply that he is a monster as well. Petkanas begins stuttering right off the bat praising Obama and claiming that the policy provided the schools with guidelines they had requested to create a safe environment for all students. Petkanas tries to insult President Trump, implying that the move is made out of spite because he was “emasculated” by Putin. (RELATED: Get all the news Google is trying to hide from you at Censored.news)

Tucker quickly moves on to the issue of science, asking what proof there is that gender can just be determined by what someone feels. He asks Petkanas, “So my obvious question for you is, how do I know if a person’s male or female? Is there some absolute standard people have to meet to be male or female, other than what they say?” Petkanas answers “One’s gender identity is enough to show what gender they are.” This is the argument that most Trans-rights advocates put out, but just as we see in the video, there is zero scientific evidence to back it up and dozens of implications as a result of allowing gender to be determined by self-identity instead of science and genetics.

Tucker points out great examples of how this goes far beyond bathrooms and will have an effect on everything from college, sports, and even business loans. He even brings up how it will play out in our prison system: “What prevents me from getting convicted of a felony and demanding to go to a women’s prison? It’s a real question.” Petkanas, stammering again, tries to blow if off by saying Carlson is “un-enlightened” and resorting to “silly hypotheticals.” He even says that would never happen. Except it did. Last year Paris Green, a male-to-female transgender convicted murderer in the U.K., had to be removed from a women’s prison for having casual sex with female inmates.

The point that Carlson is trying to make is that the bathroom laws only open the floodgates and until we have scientific proof or at least specific guidelines to support gender identity, the Federal Government should not be involved and let States handle it on their own.