Loretta Lynch calls for “marching, blood and death” on the streets… Dems cheer her calls for violence and bloodshed 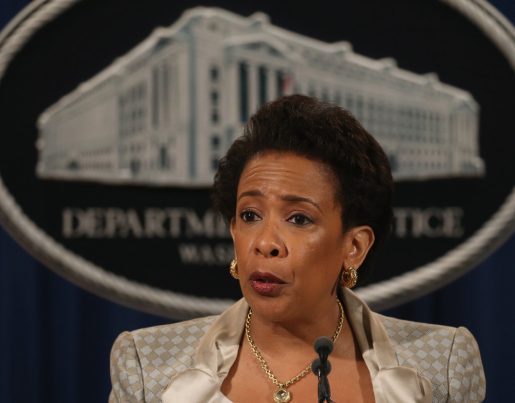 It’s not exactly a secret that Barack Obama’s administration was replete with radicals, extremists, and far left ideologues. His Secretaries of State, Hillary Clinton and John Kerry, were two of the most corrupt government officials if not of all time, then certainly in modern history. Samantha Power, Obama’s Ambassador to the United Nations was borderline anti-Semitic, stabbing our friend and ally Israel in the back every chance she got. The former president’s Secretary of Energy, Ernest Moniz, was a radical environmentalist whose views on climate change would have sent our country back to the Stone Age.

And then there was Loretta Lynch, Obama’s Attorney General, who despite her “tolerant and compassionate” tone was just as extreme as the rest of them.

In a recent video described as “words of inspiration” on the Senate Democrat’s Facebook page, Loretta Lynch all but encouraged more protests, marching and even blood in the streets in the wake of Donald Trump’s election.

The video, which is less than one minute long, starts with Lynch empathizing with Americans who are living in fear. “I know this is a time of great fear and uncertainty for so many people,” the former Attorney General says. “I know it’s a time of concern for people who see our rights being assailed, trampled on, and even being rolled back.”

It certainly is ironic how Lynch, while claiming to be fair and bipartisan, was completely silent for eight years as Barack Obama tore the Constitution to shreds. From the freedom of religion to the right to bear arms, due process to states rights outlined in the ninth and tenth amendments, Obama demonstrated time and time again that our rights were less important than his statist agenda. He was the one who rolled back our rights, not President Trump.

“I know that this is difficult, but I remind you that this has never been easy,” Lynch goes on to say. “We have always had to work to move this country forward to achieve the great ideals of our Founding Fathers.”

Sorry Loretta, but liberalism was most certainly not the ideals of our Founding Fathers. The Constitution that they created was designed to limit the federal government, not massively expand it like you and your boss tried to do. Furthermore, they embraced the notion of self-governance, a concept that yourself and most other leftists all but reject.

Lynch went on to describe the struggle for progress. “It has been people, individuals who have banded together, ordinary people who simply saw what needed to be done and came together and supported those ideals who have made the difference. They’ve marched, they’ve bled and yes, some of them died. This is hard. Every good thing is. We have done this before. We can do this again.” (RELATED: Democrats openly call for death of Trump supporters.)

In other words, Lynch is explaining that progress has often required violent protests and blood in the streets, and that it may be required again in order to bring about the fundamental transformation she and others like her dream of. The liberals have “done this before,” and they can “do this again.” (RELATED: What does the Berkeley riot say about the modern day Democrat Party?)

What would happen if the current president made similar remarks to the ones made by Loretta Lynch? Could you imagine if Donald Trump got in front of a television camera and gave an address to the nation in which he called on Republicans to march, bleed, and die to achieve their goals? Without a doubt, Trump’s words would be played over and over again on prime-time television, and he would be painted as a tyrant, a murderer or worse. But because these words came out of the mouth of Loretta Lynch, a democrat, and not Donald Trump, the mainstream media is silent. And so it goes.