Neil deGrasse Tyson demands “science totalitarianism” across America, says anyone who disagrees with him is automatically “anti-science” 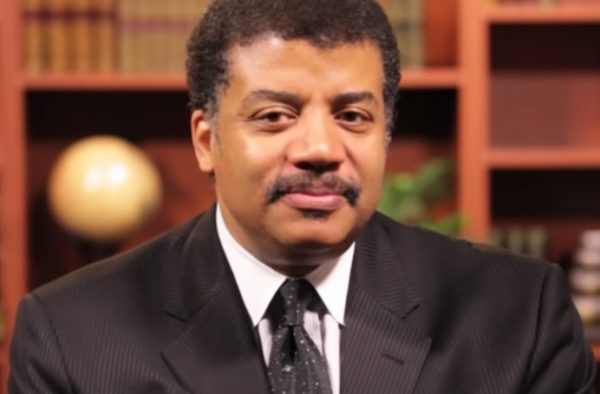 Perhaps the world’s biggest asshat with a superiority complex in all things “science,” charlatan Neil deGrasse Tyson, is on a mission to eradicate “anti-intellectualism” from the U.S. –  a.k.a. any belief that deviates from what he personally holds to be true about the world. In a recent video he released for Earth Day, Tyson bemoaned the existence of “science-deniers” whom he says represent a threat to our “informed democracy,” calling instead for a scientific dictatorship in which all opposing viewpoints are silenced.

Still apparently frustrated by President Trump’s win back in November, and the subsequent backlash against the theory of man-made climate change that ensued, Tyson is looking for any means by which to disseminate his message of scientific fascism to anyone who will listen. At the current time, this appears to be his personal YouTube channel, from which Tyson is working overtime to prop up the illusion that he’s some kind of science authority whose opinions on science issues are an unwavering beacon of truth.

Adhering to a belief system that critics of his message have dubbed as “scientism,” Tyson is of the mindset that global warming is real, GMOs (genetically-modified organisms) are always good, and evolution is absolute truth – and anyone who disagrees with him on these positions is an uninformed science-denier who deserves to be shunned and put out to pasture. It’s an extreme position, but one that others like science fraud Bill Nye now hold as well, belittling any who dare to challenge their pseudo-scientific dogmatism.

Scientism is a cult, with Neil deGrasse Tyson as its most prominent leader in the modern age

Explaining how Tyson went lunatic, Mises Institute writer, Jonathan Newman, in a recent article on the subject, unpacks how scientism adherents have turned science into a type of religion that simply cannot be questioned. Rather than view science as a continual process of discovering truth, members of the scientism cult have turned science into an absolute truth in itself, which leaves no room for scrutiny or reform.

“What is true exists independently from what humans believe to be true or how humans arrive at truth claims,” Newman points out, emphasizing once again that science is a process of arriving at truth, and one that changes depending on the type of truth being sought. “The scientific method, the process of using repeated experiments in an attempt to validate or falsify the conclusions of previous experiments, is but one way humans attempt to discover truth.”

Not only does Tyson routinely over-rely on the scientific method, worshiping it as the golden calf of his personal belief system, but he also arrogantly contradicts himself in the way he presents it as the solution to truth discovery. In one breath Tyson admits that peer review is an important part of the scientific process, while in another, he dismisses peer reviewers who come to a different conclusion than he has on a particular subject.

In his most recent video, for instance, Tyson adamantly defends “rivals” who question his work and double check it themselves. But non-scientists – that is, people who don’t necessarily hold all of the degrees that Tyson and his acolytes do – are not allowed to ever question “science.” Those who do, in Tyson’s view, are science-deniers who are delaying the “political solution” to life’s most pressing issues.

“We may not all be equipped with a laboratory, but we are all equipped with reason, experience, preferences, common sense (some more than others), gut instincts, some ideas about what is morally right and what is morally wrong, and our own areas of expertise,” says Newman about the valid scrutiny of “science” by members of the general public.

“Surely these are not meaningless when it comes to judging the claims of a politically-connected technocratic elite and their policy recommendations.”