The bombings have only just begun: “Progressive” Western civilization is slaughtering itself by foolishly appeasing those who seek to destroy it 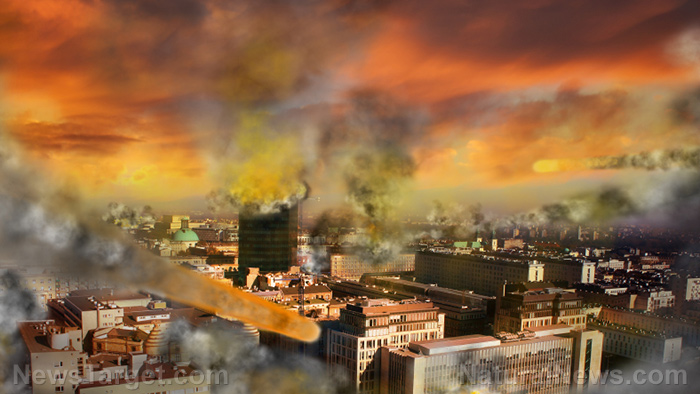 I’m not going to get into the details of the ISIS terrorist attack at the Grande concert in the UK except to say that it is truly just the beginning of the slaughter yet to come.

Western civilization, you see, has become obsessed with self-induced idiocy and political correctness that’s so insane, its political leaders can’t even muster the will to engage in simple acts of self-defense against a cultural onslaught. Western Europe, in particular, is being overrun by radicals who practice an extreme, violent form of Islam that has zero tolerance for anyone who isn’t obedient to their narratives.

If that sounds familiar, it’s also the philosophy of the political Left in the United States, where intolerance is now so extreme and dangerous that Leftists openly call for conservative speakers to be killed before they can utter “hateful words.” Liberalism has reached “peak idiocy” everywhere across the Western world, and every Western nation is currently on a suicide path of self-destruction, all aided by delusional tech giants like Google, Facebook and Twitter, all of whom are systematically censoring reason and logic in order to appease the obedience demands of the Left-wing tolerati.

Appeasing the very terrorists who are murdering your citizens

Liberalism has become so obsessed with embracing the terrorism of fringe Islamic radicals that they excuse the routine murder of gays by saying such violence is “part of their culture” and thus must be “respected.” Even the dehumanizing treatment of women by Islamists is pardoned by the same Leftists who, at one moment project themselves as “feminists” who demand women’s rights, then at the next moment they advertise themselves as “tolerant progressives” who accept Islam’s serial abuse of women and children, including the systematic maiming of young girls via female genital mutilation.

The political leaders of this organized suicide of Western civilization — Merkel, Obama and now Macron — aren’t stupid people; they’re actually working quite deliberately to undermine Western civilization and destroy capitalism, democracy and European-Caucasian culture. Merkel, for example, is an agent of the old East Germany communist cabal. She’s using KGB-style tactics to systematically undermine and destroy Germany, and she has almost achieved her goal if seeing Germany completely overrun and culturally “cleansed.” Obama, who has always been a Muslim, was a sleeper cell operator whose job was to systematically dismantle America’s borders, economy and culture. France’s Macron is a clueless globalist puppet, of course, and if Hillary Clinton had been elected in America, she would have continued to carry out the mass cultural and economic destruction initiated by Obama.

The mainstream media — which now has the laughable credibility of a high school student newspaper — is run by gossip queens, odorous swamp creatures and mindless puppets who have long abandoned any ability to engage in legitimate journalism. The Washington Post, NYT and CNN are all now little more than rumor mill fiction rags hell-bent on destroying the People’s democracy no matter how much credibility they lose in the process. Yet, just as they believe they are working to overrun the Republic, they fail to realize they’re all party to Western civilization being overrun by the radical terrorism leading edge of the Islamic occupational forces. Those forces have used open borders and lax immigration enforcement to occupy Western nations such as Germany, France, the UK and the USA. One by one, they are “activating” as lone wolf attackers, targeting large crowds with large-scale bombings, shootings, vehicle slaughter or other forms of extreme violence, even while the clueless Left continues to pursue appeasement and “tolerance” in the face of a systemic war being waged against them in their own cities.

In response to this, the liberal, left-wing media tells us that we are the intolerant ones for not loving the slaughter. We are “Islamophobes” for pointing out that a radical fringe wing of Islam is consistently behind all these violent attacks, even if we acknowledge that Islam as a whole is practiced peacefully by most of its followers. We are not “tolerant” enough if we don’t love the bombings, the vehicle manslaughter and the mass shootings in gay bars, apparently, because the Left openly excuses all those acts as nothing more than an “expression of their culture.”

Which is the bigger threat to Western civilization: Islamic terrorism or lunatic Liberalism?

At this point, I don’t know who is more insane: The fringe branch of Islamic terrorism that’s carrying out these acts, or the insane, mentally ill Leftists who excuse such acts. When CNN consistently refuses to even mention the names of terrorists who have Muslim-sounding names, you know there’s a deep denial hard at work across the dishonest left-wing media.

Unless something changes, of course, Western civilization will fall. This is obviously the goal of those carrying out these attacks across Western cities like London, France and Miami. Knowing that progressive Western nations have lost the willingness to defend their borders, their culture and their citizens — that is, until President Trump came along and set a new tone — the terrorist aggressors have found Western nations to be an open field of easy opportunity to not just wage open warfare on the streets of their enemy nations, but to even be welcomed and thanked for such occupation by the gullible, weak-willed political correctness of Leftism.

Many sleeper cells in America today were deliberately brought here by Obama, distributed across multiple U.S. cities using government funds, then given government grant money which was easily diverted to fund their terrorism operations. This was all put in place by Obama, the same “sleeper cell” President who funneled over $1 billion in laundered money to Iran, literally delivering pallets of cash on a transport plane, knowing full well that Iran would use the money to fund its nuclear weapons program that would target Israel. This was all part of Obama’s plan to destroy Western influences all across the globe, of course, and it’s a plan that he continues to carry out behind the scenes, running a “covert resistance” inside the bureaucracy to destroy Trump, overthrow the Republic and achieve a totalitarian police state run by Leftists who conspire with radical elements of Islam to overrun America.

If you don’t yet see all this playing out right in front of you, you’re hopelessly behind the curve. Because most Americans tend to be polite and civilized, they will hesitate to react to this sort of covert invasion until it’s too late. People want others to think they are “tolerant” and kind, so they openly welcome occupying enemy forces right into their own nations and cities, even funding their operations with government resettlement entitlements. Then they wonder why their cities keep being bombed by the very people they welcomed in.

Note that Japan does not have a radical Islamic terrorism problem. Ever wonder why? They don’t invite the world’s displaced immigrants into their country. Japan protects its borders, language and culture. The biggest threat to Japan right now is North Korea’s missiles, not Islamic terror cells. Any nation that opens its borders to invasion is practically begging to be occupied and overrun by extremist violence. It makes me wonder: When a fringe terrorism Islamic sleeper cell in Los Angeles sets off a radioactive dirty bomb and manages to “nuke” the city with deadly radioisotopes, will the Left-wing media secretly cheer the “achievement” as coming from an oppressed culture that we must respect?

We are really at the point now where the left-wing media openly desires to see America overrun and destroyed, to be replaced by a totalitarian police state run by the political elite. All the things that make America a nation worth protecting — economic freedom, the Bill of Rights, the Electoral College, the Constitution and so on — are despised by the Left. This is why they love radical Islamic terrorism: They share the same goal of destroying Western civilization and bringing America to its knees.

Had Hillary won the last election, that outcome would have been irreversible. But now, with Trump at the helm, there is a small but genuine chance that We the People may yet be able to beat back the insane, lunatic Left and its desire to destroy America by overthrowing the Republic and importing an actual standing army of radical sleeper cells who will systematically bomb America’s cities while they attempt to gain political power and influence.

This, my friends, is the real reason why the entire political establishment is working so desperately to destroy Trump and get him out of office. If the nefarious, anti-American forces manage to overthrow our duly elected President, by the way, that will be the Second Amendment Activation Day (SAAD) — the day you should pick up your rifle, march on Washington and defend your Republic against this treasonous overthrow attempt being waged by those forces who hate America and everything it stands for.

It has really come down to this very last option for defending this nation against those who seek to obliterate it. Let us all hope it does not come to that, but if it does, be prepared to serve your country one more time as the last line of defense against the insane, lunatic forces that absolutely will not stop until they have seized control over the government, the media, the university system and every institution that influences culture and law.

As Kurt Schlichter correctly writes at Townhall.com, “This is a coup against our right to govern ourselves,” saying:

This is a coup against us. It’s a coordinated campaign by liberals and their allies in the bureaucracy and media to once and for all ensure their perpetual rule over us. We need to fight it, here and now, so we don’t have to fight it down at the bottom of this slippery slope.

You are witnessing a slow, creeping political coup taking place right now. You are hereby reminded that we may all soon be called upon to defend our nation against a communist-centric “Cultural Revolution” overthrow attempt being led by the anti-American media and the deep state bureaucracy that’s working overtime to undermine President Trump.