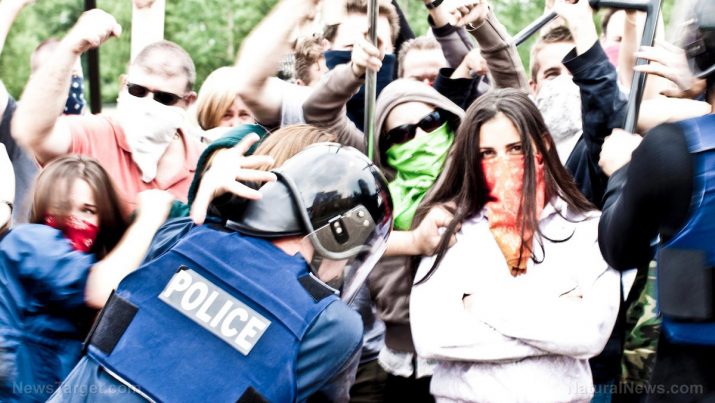 In recent days you may recall, on this site and others, reading about wild tales involving a group of “misguided” students at Evergreen State College in Olympia, Washington who demanded observance and compliance with “No Whites Day” while threatening professors, staff and other students who disagreed with the racist demonstration.

The little ingrates were making all sorts of demands from the college, including universal compliance with the event, which required all whites to be banned for a full day — which, of course, included white students, who also pay to attend the college.

Many of these demands were simply ridiculous, including a homework exemption that ensured students who participated in taking over school property and harassing fellow students and staff would not be punished by professors for turning it in late.

Now, because they obviously believe they control the universe as well, the same domestic terrorists are demanding that all videos showing them berating, cursing at and otherwise threatening faculty and students alike be taken down from the Internet.

Students at Evergreen College, demanding the suspension of a professor who opposed a school event asking white students and staff to leave campus, are demanding that a video of their protest efforts published online be taken down.

“We demand that the video created for Day of Absence and Day of Presence that was stolen by white supremacists and edited to expose and ridicule the students and staff be taken down by the administration by this Friday,” the students said in a list of demands they gave to university President George Bridges. (Related: Read America’s universities have become training camps for violent left-wing extremism.)

First of all, what is this “demand” business? “We demand…?” You’re students; you can ask and you can petition, but you don’t demand.

Secondly, this “demand” reads like it came from some North Korean propagandist, not a reasonable person interested in resolving differences. The “white supremacists” claim was particularly ironic, given that the pinheads organizing this ridiculous “Day of Absence” are the ones implementing a racist policy toward whites.

As Breitbart noted, the video — which has since been taken down — shows unhinged students screaming and shouting down Prof. Bret Weinstein, who is white, for his refusal to participate in the “no whites allowed” day on campus. It spread quickly via social media.

“On a college campus, one’s right to speak — or to be — should never be based on skin color,” he said in an email.

Demanding that it be taken down would have been a tall order for the university, given that social media is diverse, often anonymous, and often dependent on the fact that things get shared again and again. (Related: Read According To The Insane, Intolerant Left, WHITE Women Are Not Allowed To Run Burrito Shops Without Being Labeled Racists.)

But the real crime here is the behavior of these students. Not only should their “demand” that white people leave the campus for any amount of time have been vehemently slapped down by the school administration, the resultant caving in to other student demands is only further emboldening them to commit more disruption in the future. At one point, reports said, some students so incensed by Weinstein’s response were actually searching cars for him, perhaps to kidnap him and cause him harm. That sounds incredible, but Weinstein told reporters he was informed of same by campus police.

“First and foremost, I want to state that there will be, as far as I know, no charges filed against any students involved in actions that occurred this morning,” Bridges told students at one point. “We will be conducting a major review, an investigation of all that occurred and will be reporting back to you, the campus community, about exactly what happened, why it happened and what we intend to do about the incident — not the incident, excuse me, the actions that were taken, both students, staff and faculty involved.”

This is incredible, but it helps explain why students on this campus — and scores of others around the country — continue to act more like hooligans than anything else; they are being empowered to do so by weak, cowardly, enabling school administrators.