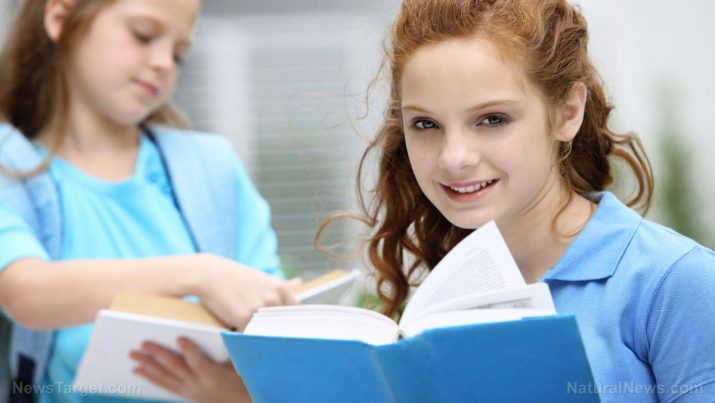 There is a reason that people have learned reading, writing and arithmetic in generally the same way over the years, and that’s because the tried-and-true traditional methods work. That’s why many people wondered what the real agenda of the Common Core national standards were when the Obama administration started pushing for it so relentlessly. This ridiculous set of educational standards has left many students and parents baffled and frustrated, and it’s believed to be a key reason that American kids are lagging behind other nations in academic performance. What would happen if we got rid of it entirely? If the results gained by one Florida school are any indication, we would likely all be much better off.

Mason Classical Academy, a charter school in Naples, Florida, prides itself on providing a classical education, which it believes brings about “superior educational results” – and leading the county in English Language Arts is proof they’re on the right track.

They have rejected the backward approach of Common Core, which sees kids memorize entire words in kindergarten before later being introduced to phonics once they are in elementary school. By that point, their brains are already used to whole words, which makes grasping the concept of phonics and applying it far more difficult than it needs to be.

What does the classical approach embraced by the Academy entail? According to their website, language-focused learning based on written and spoken words makes the brain work harder to convert words into concepts, while image-based approaches encourage passivity. The time-tested approach of phonics is very likely the reason you are able to read this article in the first place, and it’s hard to imagine why anyone would consider it inadequate.

Thanks to the classical approach of phonics, an impressive 90 percent of the third-grade students at Mason Classical Academy were proficient in English Language Arts, compared to just 58 percent in the county overall, most of whom rely on Common Core. In fact, the MCA third-graders were in Florida’s top two percent, while fifth graders from the academy ranked in the state’s top one percent.

These students look even better when you compare them to California, where the state average is just 43 percent proficiency among third graders. Even worse, six public schools in Baltimore do not have a single student who is proficient in either English Language Arts or math. It’s almost like students are being set up to fail.

Of course, not everyone is happy about this school’s success. Common Core proponents are panicking because these results expose the system for the fraud that it is. The school has been on the receiving end of criticism from everyone from the district’s superintendent to the local news outlet Naples Daily News, according to The Freedom Project.

Why is Common Core setting students up to fail?

Among the many criticisms of Common Core is the fact that it is so strongly focused on test results and teachers are so worried about losing their jobs if their students don’t perform that kids are forced into busywork, missing out on the valuable opportunity to develop social skills and boost their well-being through recess outdoors. It also stifles creativity and stresses children out, which can adversely affect their emotional and physical health.

One of its defining characteristics is the way it “dumbs down” many concepts and has students take too many steps to reach conclusions that are obvious to those of us who were schooled the traditional way.

For example, many people were outraged when a second-grade student’s homework went viral after a correct math answer was marked wrong by the teacher because it wasn’t “friendly.” When asked to solve 530-270, the student arrives at the right answer by subtracting the way most of us were taught in school. Although the student got the right answer, his teacher wanted him to solve it by adding 30 to both numbers so the problem would then be 560-300. There are countless other examples of homework just like this one that illustrate how Common Core is unnecessarily confusing and focused on all the wrong things.