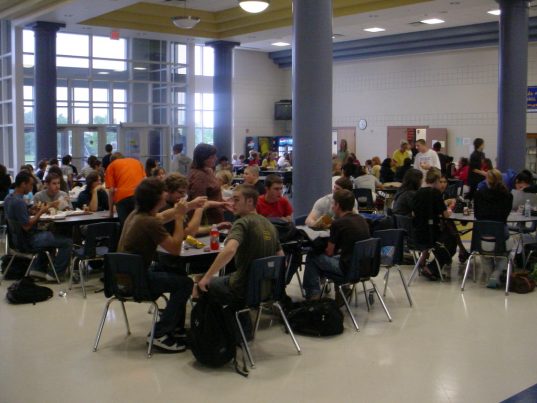 What happens when college and university campuses that are run by far-Left academics aren’t far-Left enough? Easy; one day they just implode because they have become too expensive to operate.

As reported by The Wall Street Journal, student demands are venturing into the absurd and are now even focused on turning the school cafeteria into an Alt-Left version of themselves.

The paper notes that at least some students coming back to class at the University of Texas in Austin are much more focused on their food than their studies:

Students … will have twice as much help wrestling with some of the big questions that college presents.

For instance, does water contain gluten? And, is all food genetically modified?

Those are among a growing list of food-related student queries that prompted UT Austin to hire a second campus dietitian ahead of the fall semester.

Now, don’t get me wrong. It’s perfectly fine not only to want to know more about the food you’re eating but to ensure that it’s as clean as it can possibly be. But we’re talking about a college cafeteria here, not a trendy eatery or organic food market. And now the persnickety behavior is costing the university more money — in personnel and food costs — that has to be paid for by students.

The first dietician, Lindsay Wilson, told the WSJ that she was getting far too many requests for personalized menus for snobbish eaters, as well as others for information about the foods being provided and sold in the cafeteria.

“I have had a little pushback from some very feisty vegans,” she told the paper.

She’s not alone, nor is the University of Texas the only school to come under siege by students who want expensive, unrealistic changes and additions made to school cafeteria menus.

Today, for instance, at the University of Houston, students might march for hydroponic foods like cilantro. The university just spent $6,500 to construct a pair of hydroponic grow towers which, as Natural News readers know, are vertical gardens that use nutrient-infused water to grow herbs and other small crops indoors, without soil.

The University of California—Los Angeles (UCLA) has built aeroponic grow towers that only use mist to grow thyme, butter lettuce, and microgreens on top of the school’s Bruin Plate dining center.

“If you’re not eating good things, how do they expect your brain to grow?” asked Hannah Logan, a senior at the University of Massachusetts-Amherst, who is majoring in sustainable farming and food.

Obviously, school administrators are taking the demand seriously. UMass Amherst officials have pointed to a 2016 survey which found that 70 percent of the university’s students said better food quality was important to them and something that attracted them to the school. (Related: It’s time to clamp down on college CRYBULLIES and take back America’s universities from the lunatic Left.)

So what has happened? Spending on this stuff has grown (no pun intended) dramatically as well. UMass has spent $4.9 million on local and sustainably grown foods this year through June; that’s up from $2.7 million just three years ago.

Someone has to pay for that kind of largess and, you guessed it, that would be the students or, more accurately in most cases, their parents. Thanks to guaranteed government money, tuition has increased on average 400 percent in three decades. With such a windfall of funding, schools can — and are — spending tens of millions on fads and other perks to attract students. The food fad is but one of them.

There’s nothing wrong with wanting to grow wholesome, healthy foods, and to consume wholesome, healthy foods. But if such programs are going to cost schools the kind of money they are costing, is it the school’s responsibility to provide those kinds of food choices or should it be up to students themselves to bring it with them?

Just keep in mind college isn’t getting cheaper, it’s getting more and more expensive, and that’s partly due to expensive food demands like these.