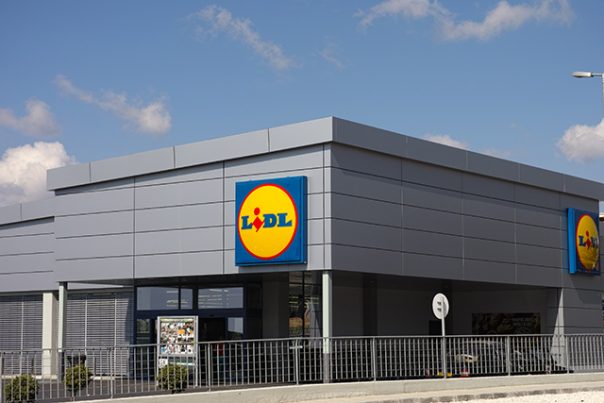 You can find lots of things at the discount European supermarket Lidl, from affordable organic honey and olive oil to a revolving assortment of ethnic foods. However, there is one thing that you won’t find at Lidl: That famous symbol of Christianity known as the cross.

It’s not unusual for a grocery store not to have any symbols of religion on its aisles; after all, they are selling food, so Lidl’s omission is hardly odd on the surface. However, once you realize that they have gone out of their way to actually Photoshop crosses out of famous landmarks, it suddenly becomes far a more unsettling situation.

The packaging of foods such as moussaka, halloumi, and gyros made by Lidl’s store brand of Greek-style food, Eridanous, features a picture of the famous blue-domed Anastasis Church nestled among other buildings on Santorini’s recognizable sunny shoreline, but the white cross that famously sits atop the dome has been erased.

Are they trying to pretend like Christianity doesn’t exist? You can’t just airbrush an entire religion away, although many people are perceiving the move as an attempt to “memory hole” evidence of Christianity. Is a cross really that offensive to the non-Christians who shop there? The company claims it “respects diversity,” so why isn’t it respecting what is one of the most popular religions in the area it serves?

Angry customers have made their feelings known on Lidl’s official Facebook page, vowing to boycott the store until it changes the design of the packaging. Many are deeply offended Christians, while others wonder why the chain would erase such a treasured part of Greek culture from the packaging of its food.

When contacted by the Belgian media outlet RTL, a spokesperson said: “We are a company that respects diversity and this explains the concept behind the packaging.” The spokesperson added that Lidl avoids using religious symbols on packaging in order to be neutral.

In a response to an unhappy customer who posted on the Lidl U.K. website, a representative of the firm said that the packages’ most recent design is not “intended as a statement” and promised that all the feedback they receive will be considered for future redesigns, which sounds a lot like Lidl is trying to sweep the issue under the rug.

Christian crosses must go, but Islamic symbols can stay

In today’s overly politically correct landscape, one might almost be willing to dismiss this as nothing more than a business-minded decision on Lidl’s part, however misguided it may seem. Curiously, however, they have decided that Islamic symbols like minarets on Halal food are perfectly acceptable.

A Greek Archbishop, Archbishop Gregorios, has demanded that Lidl apologize for removing the cross, which he said offended Christians and Greeks alike.

He told Premier: “It is immoral in my eyes to remove something which is there for 2,000 year [sic] and is the symbol that Christ died on the cross for you, for me, for millions of people. The company must restore the church and apologies [sic] to the public… without making a fuss. This is my suggestion.”

Meanwhile, the Archbishop of Prague, Cardinal Dominik Dyka, condemned the move in an open letter to Greece’s ambassador to the Czech Republic, calling the act immoral.

Lidl has more than 10,000 stores across 28 countries in Europe including Germany, France, Spain, and the U.K. Christianity plays an important part in European culture and is widely practiced across the continent, so this move could backfire on them dramatically.

Next, they have their sights set on the U.S. market, where an initial 100 stores have been planned. After this incident, however, some Americans are vowing never to step foot inside one of their stores.