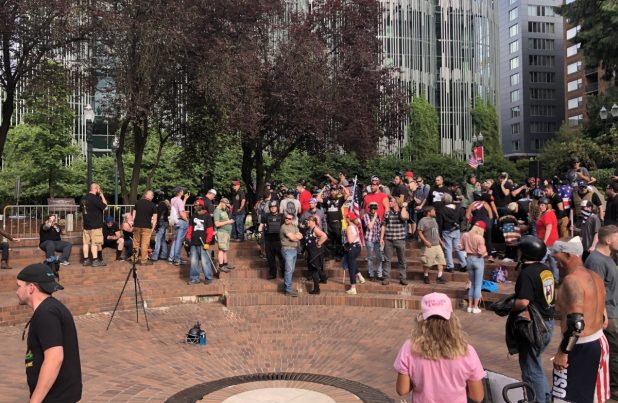 More evidence that a low-level civil war has already begun in America was evident again over the weekend, this time in Portland, Ore.

There, Left-wing Antifa domestic terrorists showed up to harass — and then do battle with — a Christian conservative organization called Patriot Prayer, which had obtained a permit from the city to hold demonstrations and a march.

Once again disregarding the First Amendment speech, religion and assembly guarantees, Antifa thugs brought weapons, mace, and other instruments of violence to bear as Patriot Prayer members attempted to gather and march.

As reported by The Oregonian:

A counter-demonstration by masked local anti-fascist groups gathered nearby among a heavy police presence. Officers seized weapons such as utility knives, clubs and chemical sprays, detaining several protesters early on.

Things turned ugly shortly after 6 p.m., when Patriot Prayer protesters spilled into Third Avenue to begin their permitted march through the streets of Portland.

Photos taken at the scene by journalists, citizens, and participants showed opposing ‘forces’ wearing helmets and various levels of protective gear. Some sported actual shields adorned with images of U.S. flags and their respective causes.

As Patriot Prayer members began marching as their permit allowed, they were immediately pelted with eggs, half-empty bottles of water and, in some cases, mace and pepper spray. Some even hurled firecrackers at the marchers. The latter act prompted federal law enforcement officers on scene to fire pepper spray-filled paintballs into the Antifa crowd.

Eventually, local police declared a riot, revoked Patriot Prayer’s permit, and moved in to shut down the demonstration.

As further noted by The National Sentinel, “If this isn’t evidence of a nation bitterly divided, then nothing is.”

Several pictures and videos were taken of the melee and posted to social media paint the picture well.

This footage was captured by Catherine Van, a correspondent for KATU:

This video clip shows Portland officers driving into the mayhem followed by a series of loud flash bangs likely aimed at dispersing the increasingly unruly crowd, also from Van:

This Patriot Prayer member had to have mace washed out of his eyes with milk.

Patriot prayer supporter says he got maced. He’s getting milk poured into his eyes #LiveOnK2 pic.twitter.com/7csCN7Cw9a

Has the new civil war begun?

At one point, Patriot Prayer members were upset because they believe that the Portland Police Department set them up for failure, probably by allowing so many Antifa thugs to assemble as well (without a permit).

In the end, only five people were arrested, but several people — including at least one police officer — had to be taken to area hospitals, all with non-life-threatening injuries.

No doubt that many Antifa members showed up just looking for a fight simply because they like to brawl (as long as they have lots of back-up) and they figure they can get by with being lawless terrorists for a little while.

But what is also true is that most of them justify their violence because they have arbitrarily decided — without a shred of evidence — that conservative groups like Patriot Prayer are “Nazis” and “fascists” who deserve everything they get.

Interestingly, it was the real Nazi party — the National Socialists of Germany — who used the same tactics of violence and intimidation to stamp out any resistance to the rising Hitler regime in the early-to-late 1930s. It was during this period that one group of people — Jews — began to be persecuted simply because Hitler detested their religious affiliation.

Any similarities to modern-day Antifa “anti-fascists?” You bet there are.

As The National Sentinel noted, what we’re increasingly seeing on the streets of our large, mostly Left-wing cities, is the rise of a political intolerance that will only lead to more violence and, some think, a new civil war.

Read more about Antifa thuggery and domestic terrorism at Antifa.news.